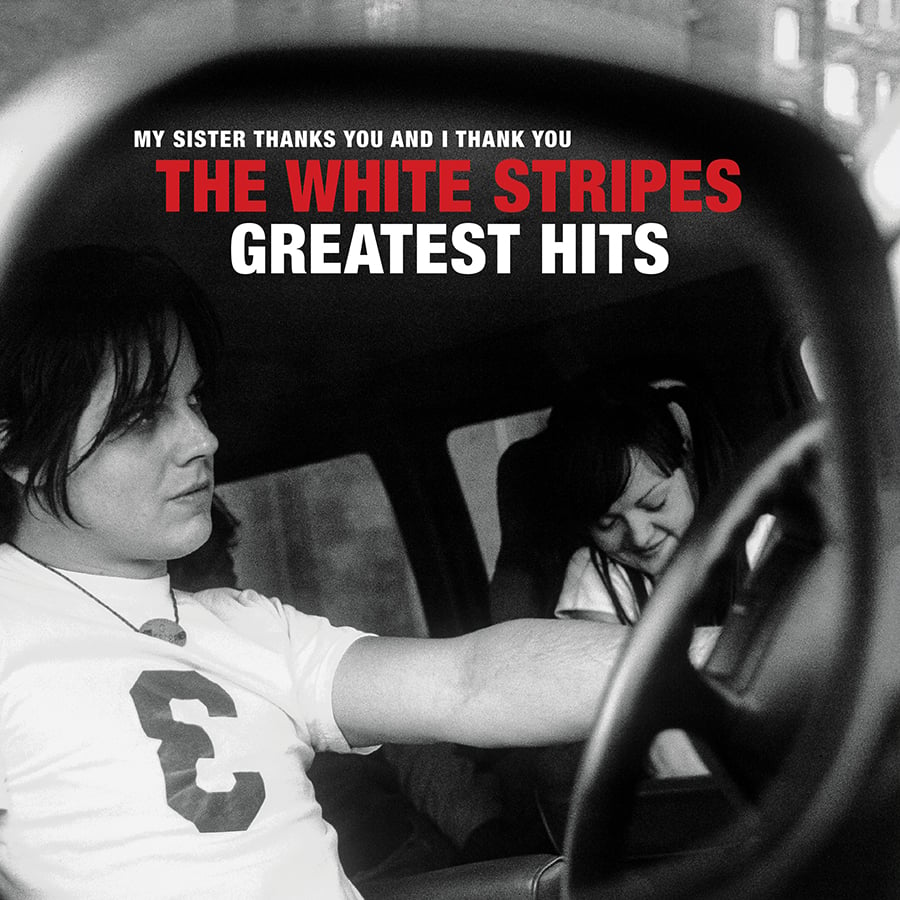 Third Man Records and Columbia Records will release The White Stripes Greatest Hits on December 4. The first-ever official anthology of recordings from the iconic rock duo, Jack and Meg White, is an essential career-spanning collection highlighting 26 previously released songs – from late Nineties flashes of brilliance through early 2000s underground anthems, masterful MTV Moon Man moments, Grammy-grabbing greatness, and worldwide stadium chants…the songs here are as wide-ranging as you can imagine. The album is available for pre-order on CD, 2xLP 150-gram black vinyl, and digitally (streaming & download) HERE. A deluxe limited edition and ONLY colored vinyl variant of The White Stripes Greatest Hits is also available as part of Third Man Records’ Vault Package #46. Not leaving out a crucial component to the story of The White Stripes and Third Man Records, information about added value items for release week album purchases at independent record stores will be announced at a later date.

Twentysome years ago, a brother and sister climbed into the third floor attic of their Southwest Detroit family homestead and bashed out a primitive cover of David Bowie’s “Moonage Daydream,” sparking something in both of them and leading them to take their simple guitar-drums-voice approach to a local open mic night on Bastille Day. In what feels like a whirlwind, they record and release two 7-inch singles for a local indie label. A not-so-local indie offers to put out a full-length album. They start touring. Another album. More touring. Another album. Folks REALLY start to pay attention. Crazy touring, more albums, accolades, wildest dream after wildest dream coming true. “World-renowned” becomes an appropriate descriptor, as does “long-building overnight sensation.” The same hard work and dedication that The White Stripes exhibited from the onset of their existence is what has been poured into The White Stripes Greatest Hits. In an era of streaming where the idea of a “Greatest Hits” album may seem irrelevant – that an act’s most streamed songs are considered their de facto “hits” – we wholeheartedly believe that great bands deserve “Greatest Hits” and that a large part of Third Man Records’ and The White Stripes’ successes have been built on zigging when the rest of the music business is zagging. Thus, for a great band with great fans, a greatest hits compilation for The White Stripes is not only appropriate, but absolutely necessary.

In true White Stripes fashion, the band has revealed only one of the twenty-six songs on the track list today, “Ball and Biscuit,” keeping the rest a mystery to be unveiled at a later date. Ensuring that this special celebration is started in full face-melting force, the band have dug into the archives to share a never-before-seen live performance video of “Ball and Biscuit” from their October 22nd, 2003 Shibuya-AX show in Tokyo, Japan – WATCH HERE. Shot on four camcorders, this was the band’s third trip to Japan and the second of a six date Japan run on this tour. Furthermore, all of The White Stripes’ groundbreaking official music videos will be upgraded and released in High Definition as part of the Greatest Hits release in December – be sure to subscribe to The White Stripes YouTube channel for more from the archives and to watch the HD music videos when they debut. Jack & Meg have also brought their red, white and black world to Instagram to commemorate the announcement (@thewhitestripes).

Additionally, for the most dedicated of supporters, Third Man Records is releasing an expanded collection with an added bonus third LP of largely overlooked, previously scattered b-sides for Vault Package #46. For the Vault version, first two LP’s containing the original track list will be pressed on glorious red and white discs and will be the ONLY color variant available. The bonus third LP is pressed on an exquisite red/white/black “detonation” colored vinyl. Taking it to another level, the Vault version of Greatest Hits features iconic artwork from longtime The White Stripes collaborator Rob Jones (completely different from the standard version). The package also comes with three Rob Jones silk-screen prints and a White Stripes-themed set of magnetic poetry. For more information on Vault Package #46 & to sign up before the October 31st midnight CT deadline, head HERE.

The White Stripes Greatest Hits is the first record to be released under an historic new agreement between Sony Music Entertainment, Jack White, and Third Man Records. The new agreement covers the worldwide distribution of a majority of White’s recordings with The White Stripes, The Raconteurs, The Dead Weather and his solo work, marking the first time the extensive Jack White music catalog has been available through one label group.