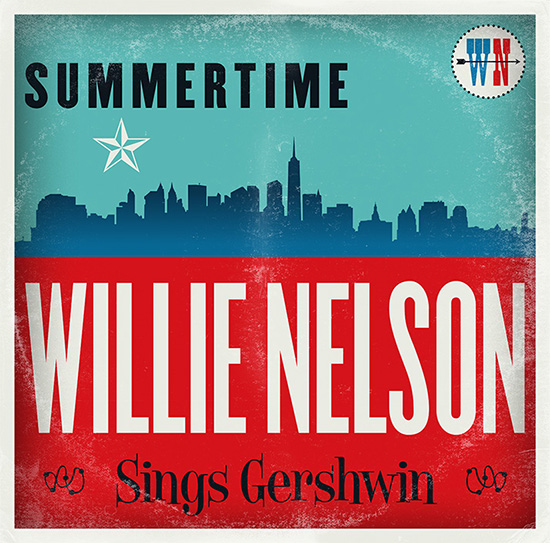 Willie Nelson’s new album of pop standards, penned by America’s legendary songwriting duo George and Ira Gershwin, follows the selection of Willie as the 2015 recipient of the Library of Congress Gershwin Prize for Popular Song. The first country artist ever to receive the distinguished Gershwin Prize, Willie Nelson was honored in November 2015 with a two-day celebration in Washington, DC, culminating in a star-studded tribute concert (scheduled for broadcast on PBS on January 15, 2016).

President Jimmy Carter, who was unable to attend the concert, wrote in a letter read by host Don Johnson to the crowd that Nelson’s music has “enriched the lives of people far and wide for decades” and that the songwriter is truly worthy of this “prestigious and well-deserved award.”

“To get a Gershwin award for anything is great but to get one for songwriting is especially great because Ira and George Gershwin were just fantastic writers. They wrote some of the greatest songs ever,” said Willie Nelson in response to receiving the Gershwin Prize. “The Gershwin songs have been here for many many years. When I was just a small guy, I remember hearing all these great Gershwin songs and they’ll be around forever because great music like that just does not go away.”

Among the 11 Gershwin classics recorded by Willie Nelson for his new album are two duets: “Let’s Call The Whole Thing Off” with Cyndi Lauper (the song was originally introduced by Fred Astaire and Ginger Rogers in the 1937 film Shall We Dance) and “Embraceable You” with Sheryl Crow (the song was performed by Ginger Rogers in Girl Crazy, recorded by Billie Holiday in 1944 and inducted into the Grammy Hall of Fame in 2005).

Other songs on Summertime: Willie Nelson Sings Gershwin include: “But Not For Me” (written for Girl Crazy, Ella Fitzgerald’s version won a Grammy in 1960); “Somebody Loves Me” (published in 1944, the song was a hit for The Four Lads in 1952); “Someone To Watch Over Me” (written in 1926 for Oh, Kay!, the song also closes out Willie Nelson’s 1978 album Stardust); “It Ain’t Necessarily So” (written for the Gershwins’ 1935 pop/gospel opera Porgy and Bess); “I Got Rhythm” (the 1930s jazz standard written for Girl Crazy); “Love Is Here To Stay” (the last composition completed by George Gershwin before his death in 1937, the song serves as the main theme in An American In Paris and is a centerpiece of the Great American Songbook); “They All Laughed” (written for the 1937 film Shall We Dance); “They Can’t Take That Away From Me” (written for the 1937 film Shall We Dance); and the immortal “Summertime” (an aria originally written for Porgy and Bess, “Summertime” has become one of the most covered songs in pop music history).

Summertime: Willie Nelson Sings Gershwin hearkens back to Stardust, the 1978 blockbuster album of pop standards that secured Willie’s reputation as pop balladeer (in addition to his status as one of the architects of outlaw country music). Stardust peaked at #1 on Billboard ’ s Top Country Albums and #30 on the Billboard 200. Stardust was on the Billboard’s Country Album charts for ten years—from its release in April 1978 until 1988. In 2002, Stardust was certified quintuple platinum, and it was inducted in the Grammy Hall of Fame class of 2015.

In February 2012, Willie Nelson entered into an historic new record deal with Legacy Recordings, the catalog division of Sony Music Entertainment, marking a label homecoming for Nelson, who, from 1975-1993, had cut a phenomenal string of top-selling singles and albums for Columbia Records, beginning with 1975’s seminal smash Red Headed Stranger. New titles by the artist under the Legacy imprint will include newly recorded songs and performances as well as archival releases, personally curated by the artist, drawn from all phases of his career including his recordings for RCA Records and others.