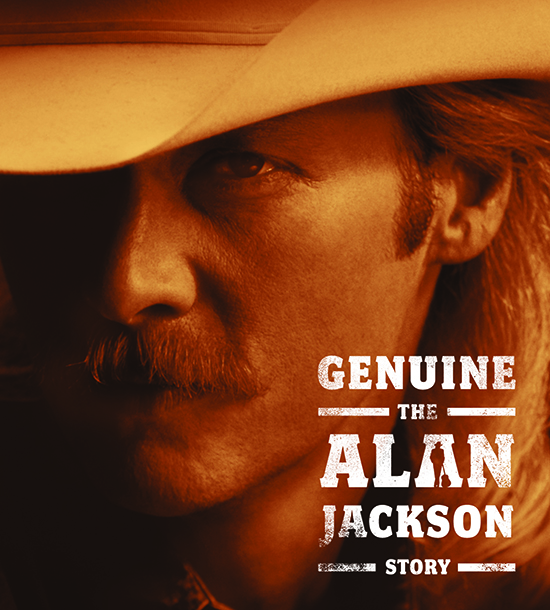 A Walmart exclusive, Genuine: The Alan Jackson Story is available for pre-order at Walmart.

Genuine: The Alan Jackson Story brings together 59 indispensable classic recordings drawn from all phases of Jackson’s career at Arista Nashville and debuts eight previously unreleased tracks including a live version of The Eagles’ hit “Seven Bridges Road,” recorded in Birmingham, Alabama on November 1, 1997, and a rare live rendition of “The Star Spangled Banner,” recorded in 2001.

The first artist signed to the newly-formed Arista Nashville imprint (shortly after the label’s launch in 1989), Georgia-born singer/songwriter/musician/performer Alan Jackson combined elements of traditional American honky-tonk, bluegrass, gospel and mainstream country music with a fresh contemporary sound all his own.

During his tenure at Arista Nashville, Alan Jackson recorded an extraordinary 50 Top 10 hits, watching 35 of them reach the top of the country charts, including 26 Billboard #1’s.

Though his debut single, “Blue Blooded Woman,” failed to crack the Hot Country Top 40, his subsequent releases, beginning with “Here in the Real World” in 1990, formed an unbroken chain of chart-topping country hits including “Wanted,” “Chasin’ That Neon Rainbow” and “I’d Love You All Over Again,” his first #1. His second album, 1991’s Don’t Rock the Jukebox showcased no less than four #1 singles: the title track, “Someday,” “Dallas” and “Love’s Got a Hold on You.” His third album, A Lot About Livin’ (And a Little ’bout Love) featured two #1’s: “She’s Got the Rhythm (And I Got the Blues)” and “Chattahoochee,” which took home the 1994 Country Music Association Awards for Single of the Year and Song of the Year.

As the 21st century dawned, Alan Jackson secured his place in the mainstream of musical history when “Where Were You (When The World Stopped Turning)” became an anthem of hope and comfort in the wake of the tragedy of September 11, 2001. The song brought home a pair of Country Music Association Awards, two Academy of Country Music Awards and the Grammy Award for Best Country Song.

2015 finds Alan Jackson still at the top of his game. He celebrated his 25th anniversary as a recording artist with a special 25-date tour and was honored with “Alan Jackson: 25 Years of Keepin’ It Country,” a retrospective exhibit at Nashville’s Country Music Hall of Fame® and Museum. In July 2015, Jackson released his 15th studio album, Angels and Alcohol, through Alan’s Country Records/EMI Nashville; the record became his 14th #1 album.

Alan Jackson
In his 25-year career, Jackson has been steadfast in his love for traditional music while enjoying major chart success. Since signing his record deal in June 1989, he has sold nearly 60 million albums worldwide and ranks as one of the 10 best-selling male vocalists of all-time in all genres. He has released more than 60 singles—registering 50 Top 10 hits and 35 #1s (including 26 Billboard #1s). He has earned more than 150 music industry awards—including 18 Academy of Country Music Awards, 16 Country Music Association Awards, a pair of Grammys and ASCAP’s Founders and Golden Note Awards. Jackson received the first-ever ASCAP Heritage Award in 2014 having earned the title of most performed country music songwriter-artist of ASCAP’s first 100 years. He is a member of the Nashville Songwriters Hall of Fame and the Grand Ole Opry.

Alan Jackson is one of the most successful and respected singer-songwriters in music. He is in the elite company of Paul McCartney and John Lennon among songwriters who’ve written more than 20 songs that they’ve recorded and taken to the top of the charts. Jackson is one of the best-selling artists since the inception of SoundScan, ranking alongside the likes of Eminem and Metallica.

Genuine: The Alan Jackson Story
Disc One
1. Blue Blooded Woman
2. Here In The Real World
3. Wanted
4. Chasin’ That Neon Rainbow
5. I’d Love You All Over Again
6. Don’t Rock The Jukebox
7. Someday
8. Dallas
9. Midnight In Montgomery
10. Love’s Got A Hold On You
11. She’s Got The Rhythm (And I Got The Blues)
12. Tonight I Climbed The Wall
13. Chattahoochee
14. Mercury Blues
15. (Who Says) You Can’t Have It All
16. Summertime Blues
17. Gone Country
18. Born Too Late (Previously Unreleased)
19. If Tears Could Talk (Previously Unreleased)
20. Seven Bridges Road – LIVE (Previously Unreleased)

Disc Three
1. Where I Come From
2. When Somebody Loves You
3. Where Were You (When The World Stopped Turning)
4. Drive (For Daddy Gene)
5. Work In Progress
6. That’d Be Alright
7. It’s Five O’Clock Somewhere—with Jimmy Buffett
8. Remember When
9. Too Much Of A Good Thing
10. Monday Morning Church
11. Like Red On A Rose
12. A Woman’s Love
13. Small Town Southern Man
14. Good Time
15. Country Boy
16. Sissy’s Song
17. As She’s Walking Away—Zac Brown Band featuring Alan Jackson
18. Love Is Hard (Previously Unreleased)
19. Ain’t Just A Southern Thing (Previously Unreleased)