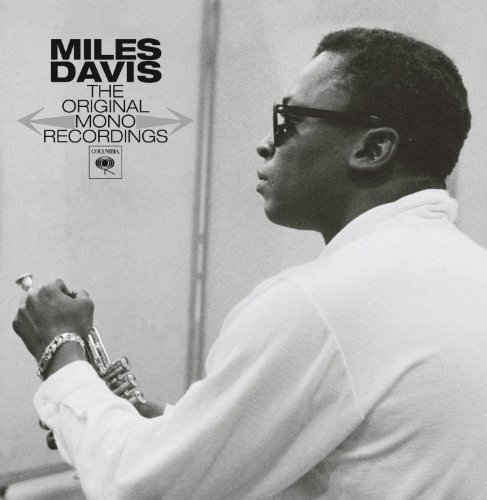 Landmark box set presents nine albums remastered in original, brilliant sound, as they were intended to be heard in the 1950s and ’60s

Nine of Miles Davis’ earliest albums on Columbia Records, encompassing music that he recorded for the label in monaural sound from 1956 to 1961 (and released from 1957 to 1964), will be issued together on CD for the first time as Miles Davis: The Original Mono Recordings. This historic box set, comprising nine CDs in mini-LP replica jackets, will be available everywhere November 11, 2013 through Columbia/Legacy, a division of Sony Music Entertainment. Pre-order at http://smarturl.it/milesmono_amzn. On November 29th in celebration of Record Store Day, Columbia/Legacy will follow up with vinyl mono editions of Kind Of Blue, Miles & Monk At Newport, and Jazz Track — capping a series of recently released mono LPs including ‘Round About Midnight, Miles Ahead, Milestones, Porgy and Bess, Sketches of Spain, and Someday My Prince Will Come.

Miles Davis: The Original Mono Recordings is a true landmark collection, with every album newly remastered in 2012-13, from the original analog master tapes. CD consumers will be able to hear Miles’ early music in mono, the way virtually all popular music was recorded, marketed and intended to be heard in the 1950s and early 1960s. Mono was the norm before the home, broadcast and film stereo era began to develop fully in the mid-’60s, leading to stereo’s all-encompassing takeover by the early ’70s.

Two of the albums included in The Original Mono Recordings are exciting rare editions that have never appeared in any Miles Davis CD collection in the U.S., and have not been generally available for many years:

The Original Mono Recordings will be housed in a slipcase similar to Bob Dylan’s The Original Mono Recordings box released in 2012. The new box will contain a fully-annotated 40-page booklet with complete discographic information including personnel and production details, plus a 2,000-word essay by author and Wall Street Journal writer Marc Myers. The liner notes add in-depth, album-by-album comments on the new remastering processes, as told to Myers by three-time Grammy Award®-winning mastering engineer Mark Wilder.

Over the course of these nine albums, whose principal recording spanned barely a half decade (from June 1956 to March 1961), The Original Mono Recordings presents a clear vision of Miles’ evolution as musician and bandleader, and as a composer graduating from hardbop to modal creations. He was famously signed to Columbia Records by George Avakian in the summer of 1955, after the A&R staff producer witnessed Miles’ showstopping solo on a jam session of “’Round Midnight” at the Newport Jazz Festival. Jazz critics acclaimed the performance as the “return of Miles,” who was considered a difficult artist to work with, who did not even have a regular working group at the time.

Taking Avakian seriously, Miles assembled a group around bassist Paul Chambers and drummer “Philly” Joe Jones, with Red Garland on piano and, after several early contenders (Sonny Rollins, Hank Mobley), Philadelphian John Coltrane on tenor saxophone. This lineup cut four LPs’ worth of material in late ’55 and ’56 to satisfy Miles’ contractual obligations to Prestige Records. They also began to record the first Columbia LP, ’Round About Midnight, named for the paraphrased Monk title tune. The LP, produced by Avakian, consisted of jazz and popular standards done in Miles’ inimitable style.

Most significantly, in terms of The Original Mono Recordings, Myers writes, “the word ‘mono’ did not appear on the cover. Instead, the jacket announced that the music inside was ‘360º Sound, Guaranteed High Fidelity.’ Stereo technology wouldn’t be in place at Columbia until 1958, so there was no need to add the word ‘mono’ to delineate a difference. ‘Mono has always been truer to the studio sound and the original intent,’ said Avakian. ‘Mono featured less audio trickery and fewer audio distractions, so you can actually hear the musical conversation between Miles and the other musicians as it occurred in the studio.’”

For the second album, Avakian realized his intention to feature Miles in the presence of a jazz orchestra: horns, trumpets, trombones, bass trombone, tuba, alto sax, bass clarinet, flutes, and clarinets, along with bassist Chambers and drummer Art Taylor. Most significantly, Miles Ahead by Miles Davis + 19 reunited Miles with his late-1940s Birth of the Cool collaborator, arranger Gil Evans. With the exception of the title track, composed by Miles and Evans, the program again consisted of jazz and popular standards done Miles’ way.

Although the third album, Milestones, was recorded in two productive days of sessions in February and March 1958, it proved to be Avakian’s final LP with Miles. It reintroduced the quintet (Coltrane, Garland, Chambers, Jones) along with a new member from Florida, former schoolteacher Julian “Cannonball” Adderley on alto sax. Some of Miles’ most iconic music is heard on Milestones: the quintet (sextet’s) versions of Jackie McLean’s “Dr. Jekyll,” Dizzy Gillespie’s “Two Bass Hit,” and Monk’s closing “Straight, No Chaser.” At the same time, the album upped the ante of Miles’ originals with two, “Miles” and the 13-minute “Sid’s Ahead,” which hinted at things to come from the inspired young (32-year old) artist.

Two months after the Milestones sessions, the quintet (sextet) was back in the studio for a day of recording with a new Columbia staff producer, Cal Lampley. The session yielded four classics, three of which, due to length, made Side B of Jazz Track: Miles’ original “Fran-Dance,” and two American Songbook standards, “On Green Dolphin Street” and “Stella by Starlight.” (The fourth, “Love for Sale,” running over 11 minutes, is included on Columbia/Legacy’s Kind Of Blue 50th Anniversary sets.) The year before (December 1957), Miles had temporarily disbanded his group and gone to Paris to perform. There he was hired to create a soundtrack for French film director Louis Malle’s suspenseful murder mystery Ascenseur pour l’échafaud (Elevator To the Gallows in the U.S.). Miles and several European jazz musicians improvised the music while seeing the film on a screen. The music, barely 25 minutes, was issued on LP in France in 1958, and was subsequently coupled with the three Lampley tracks on Columbia as the cleverly titled Jazz Track, one of Miles’ most elusive and collectible LPs.

In between, Miles got back together with Gil Evans in July and August 1958, for the jazz orchestral masterpiece, the Gershwins’ Porgy And Bess, the final LP with Lampley. The scene was then set for the March-April 1959 Kind Of Blue sessions, with Columbia’s Irving Townsend historically attributed as having overseen the recording, with a slightly revamped quintet (sextet) lineup, as Jones was replaced by Jimmy Cobb on drums, and Garland was replaced on piano by Bill Evans (on “So What,” “Blue In Green,” “All Blues,” and “Flamenco Sketches”) and by Wynton Kelly (“Freddie Freeloader”). The impact of Kind Of Blue, not only on jazz but on popular (even classical) music in general, continues to reverberate. It is part of the Library Of Congress National Recording Registry, it is #12 on the Rolling Stone list of the 500 Greatest Albums of All Time, and it was even honored by the U.S. House of Representatives in 2009, the album’s 50th anniversary.

Kind Of Blue’s closing track, “Flamenco Sketches,” might have hinted at the next project, the jazz orchestral Latin-tinged modal masterwork, Sketches Of Spain, the third of Miles’ collaborations with Gil Evans. Under Columbia’s staff producer Teo Macero (who would remain Miles’ exclusive producer at Columbia through the 1980s), two standards of the Spanish national repertoire, Rodrigo’s “Concierto de Aranjuez” and de Falla’s Will o’ the Wisp (from “El amor brujo”) were juxtaposed with three Evans originals, “The Pan Piper,” “Saeta” and “Solea.” Myers characterizes the conceptual framework as, “Davis’ piercing, crying solos supported by Evans’ sighing, sophisticated orchestrations that both provoked and mirrored Davis’ lines.”

The quintet lineup was again fine tuned in 1961 for Someday My Prince Will Come, Coltrane’s final Columbia recording with Miles (on the opening title track, from Disney’s Snow White And The Seven Dwarfs, and a Miles original, “Teo”). Tenor saxophonist Hank Mobley actually doubles with Trane on the title track, but has the tenor chair to himself on the other tracks, Miles originals (“Pfrancing,” “Drad-Dog”), and American Songbook staples “Old Folks” and Johnny Mercer’s closing “I Thought About You.”

Though separated in time by five summers, the Newport Jazz Festival performances by Miles’ sextet in 1958 (Adderley, Coltrane, Evans, Chambers, Cobb), and Thelonious Monk’s quartet in 1963, as heard on Miles And Monk At Newport, are remarkably seamless. As Mark Wilder told Myers, “I originally assumed that this album was going to need the most work to capture the original mono sound. After all, the Davis cuts were recorded in 1958, Monk’s in 1963, and both were recorded outdoors. Surprisingly, though, the master tapes were exactly like the original LP pressing and needed no fine-tuning.”

“For the producers and engineers who toiled on Davis’ albums between 1955 and 1963, mono was considered the purest and most unadulterated recorded expression of the trumpeter’s genius,” Myers writes. “Stereo versions of Davis’ albums weren’t made available until Kind of Blue in August 1959, and even then mono continued to be a priority since stereo LPs were marketed initially only to the small number of upscale consumers with stereo systems.”

The Original Mono Recordings follows in the tradition of the eight-time Grammy Award®-winning Miles Davis Series of multiple-CD box sets that began in 1996. The series culminated in the 2009 box set of 52 mini-LP replica jacketed albums, The Complete Miles Davis Columbia Album Collection, whose contents were all heard in stereo.