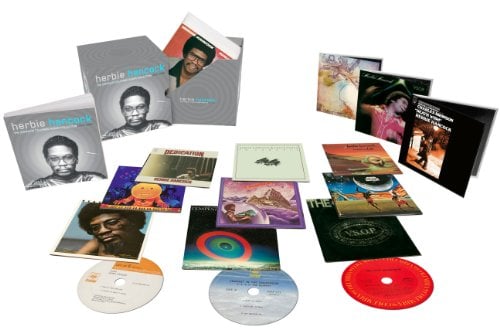 Hancock’s catalog on Columbia and CBS/Sony Japan is a microcosm of musical development in the 1970s and ’80s, and an uncannily accurate forecast of many trends that would follow.  Those developments played out over the course of 31 albums.  Eight have never been issued in the U.S. (or outside of Japan), three others have never been issued on CD in the U.S. (Sunlight, Magic Windows, Lite Me Up), and some that were issued on CD have been out of print for years.  Most importantly, all of them have never been gathered in one box set collection before.

The stunning box set structure is a chest with removeable lid, housing 28 single albums and three double-CD albums (for a total of 34 discs).  Each album will be packaged in a mini-LP CD cardboard replica of the original jacket, with original artwork including gatefold jackets where applicable.

Accompanying the discs will be a 200-page book, published exclu­sively for this collection.  In addition to dozens of rare photographs, the book will contain several sections, starting with a comprehensive 5,500-word historical essay written by Bob Belden.  Belden has won three Grammy Awards for his work with Columbia/Legacy on The Miles Davis Series, including album notes (twice) and compilation producer.  An accomplished jazz composer, arranger, bandleader, and recording artist in his own right, Belden has served as CD reissue producer at Legacy for the Hancock albums Head Hunters, Sextant, Thrust, The Piano, V.S.O.P.: Live Under the Sky, Future Shock,  Sound-System, and Perfect Machine.

The book will also contain individual commentaries on all 31 albums by Hancock discographer/historian Max Schlueter.  The third major element of the book is one of the most detailed discographies ever included in a Legacy box set, assembled by box producer Richard Seidel.  Included are full musician lineups and instrumentation, recording data (dates, producers, engineers, mixers, studios, etc.), exact original release dates in both the U.S. and Japan, cross references for additional appearances of various songs elsewhere in the box, Billboard chart information, R.I.A.A. certifications, and a short-form discography of Hancock’s solo recording career before and after his Columbia years.

Also included in the book will be sidebars on Hancock as pianist, composer and synthesist, written by Belden.  Schlueter has written a sidebar on noted record producer David Rubinson, who produced all but six of the albums in the box set, and is also known for his productions of Santana, Taj Mahal, the Pointer Sisters and the Chambers Brothers.  A special sidebar is devoted to Hancock’s late sister Jean Hancock, who contributed lyrics to many of his songs.  And another unique feature of the book is a glossary of the more than 60 different electronic instruments played by Hancock and the other musicians over the course of the recordings.

In the stream of modern jazz during the last decades of the 20th century, the imprint left by pianist, keyboardist, synthesist, composer, arranger, producer, and bandleader Herbie Hancock on jazz, fusion, pop music, R&B, disco, hip-hop, electronica and more – including his beloved traditional post-bop – spans generations.  (His pioneering use of the Vocoder – precursor to T-Pain’s use of Auto-tune – is just the tip of the iceberg.)  His 14 Grammy Awards and one Oscar are emblematic of the Buddhist principles of inclusion and collaboration that course through the ebb and flow of his career.

At the heart of that career are his 16 productive years as a Columbia and CBS/Sony (Japan) recording artist from 1972 to 1988, by far his longest, most prolific association with any record label.  Those 16 years encompassed the evolution from the “Mwandishi” Sextet, to the Head Hunters to the Herbie Hancock Group.  The breakthrough of the V.S.O.P. recording and touring groups with Freddie Hubbard, Wayne Shorter, Ron Carter, and Tony Williams ignited the traditional jazz revival of the 1980s.  Along with the Herbie Hancock Trio and Quartet lineups, he is also heard on a landmark solo electric keyboard/acoustic piano project in 1974, a full album solo acoustic piano project in 1978, and the memorable duet concert project with Chick Corea (also 1978).  And along the way: Hancock’s first digital and direct-disc records in Japan; his MTV-pioneering downtown New York “Rockit” breakthrough with Bill Laswell and Material; and the Death Wish and Oscar-winning Round Midnight original motion picture soundtracks.

Of special note in this collection are the eight albums that were released only in Japan, and are released now in the U.S. for the first time.  They are comprised of acoustic and electric, studio and live recordings, and several of them were notable for their deployment of advanced audio technologies in early development in Japan, such as digital recording and direct-to-disc.

Each of the eight CBS/Sony Japan albums was a unique addition to his disco­graphy: Dedication (solo, both acoustic and electric, live in the studio, without overdubs, 1974); Flood (the Head Hunters Band live, 1975); The Herbie Hancock Trio (with Carter and Williams, studio, 1977, one of only two piano-trio records Hancock has ever made, along with the 1981 set below); Tempest In The Colosseum (V.S.O.P. with Hubbard, Shorter, Carter, and Williams, live, 1977); Directstep (full band, studio, direct-to-disc, 1978);  Five Stars (same V.S.O.P. lineup, their only studio album, direct-to-disc, 1979); Butterfly (full electric band with singer Kimiko Kasai, studio, 1979); and Herbie Hancock Trio With Ron Carter + Tony Williams (studio, 1981).

Aside from those eight albums, there were two albums recorded and released in Japan, which were subsequently issued in 2004 by Columbia/Legacy for the first time on CD in the U.S. (both with bonus tracks): The Piano (solo, acoustic piano, direct-to-disc, 1978, recorded one week after Directstep); and V.S.O.P. / Live Under The Sky (1979).

Because of its proliferation of live concert albums, The Complete Columbia Album Collection 1972-1988 allows the perspective of hearing and contrasting many songs (originals as well as jazz standards) in multiple versions.  For example, “Watermelon Man” (Hancock’s first “hit” record for Mongo Santamaria back in 1963), was re-grooved by the Head Hunters on their self-titled 1973 LP, the lineup that included Bennie Maupin (reeds), bassist Paul Jackson, drummer Harvey Mason, and percussionist Bill Summers.  Compare it to the live concert version on Flood (CBS/Sony Japan) two summers later in Tokyo, when guitarist Blackbyrd McKnight was on-board, and Mason had been replaced by Mike Clark.  Similarly, studio and live versions of “Chameleon” are also heard on both albums, respectively.

Throughout this collection, in addition to “Watermelon Man” and “Chameleon,” there are multiple versions or re-imagined, updated versions to be discovered of “Maiden Voyage,” “Canteloupe Island,” “Dolphin Dance,” “Eye Of The Hurricane,” “Speak Like A Child,” “Tell Me A Bedtime Story,” “Butterfly,” “Sunlight,” “I Thought It Was You,” “Hang Up Your Hang Ups,” “Rockit,” and others.

A unique personality in jazz history, Hancock has been as musically controversial as his mentor Miles Davis – with whom he played in the “second great quintet” from 1963 to ’68 (with Wayne Shorter, Ron Carter, and Tony Williams).  Throughout that period, Hancock maintained a presence recording LPs under his own name as a leader on Blue Note Records.  He also lent his talent to Blue Note sessions led by Lee Morgan, Freddie Hubbard, Wayne Shorter, Donald Byrd, Kenny Dorham, Grant Green, Bobby Hutcherson, Stanley Turrentine, Tony Williams, and Jackie McLean, to name a few.

When Hancock left Miles in 1968, he carved out one of the most diverse careers ever encountered in jazz or pop.  He satisfied both the artistic and the commercial sides of his craft with acoustic and electric music made in the studio and on tour, music that often transcended categorization.  Recording 31 albums in 16 years averages two per year – but there were years when he released as many as four albums in one year’s time (1977).  Fully half the albums in this box set collection made the Billboard Top 200 albums chart, most of those reaching the Top 100, a rare achievement for a jazz musician.

Along the way, countless names passed through the tidal wave of music Hancock created: Eddie Henderson, Buster Williams and Billy Hart in the “Mwandishi” era; Bennie Maupin from the  “Mwandishi” era through most of the 1970s; Hubbard and Shorter as perennial members of V.S.O.P. (with Carter and Williams); plus (to name a few) Wah Wah Watson, Ray Parker Jr. (of “Ghostbusters” fame), Jaco Pastorius, synthesist Patrick Gleeson, Carlos Santana, Alphonse Mouzon, Sheila E., the Brothers Johnson, Adrian Belew, Rod Temperton of Heatwave and “Thriller” renown, Narada Michael Walden, and, in the quartet in the summer of 1981, 19-year old Wynton Marsalis.

Herbie Hancock: The Complete Columbia Album Collection 1972-1988 was produced for reissue by Grammy®-winning producer Richard Seidel.  Seidel’s box set credits for Legacy include the four most recent Miles Davis box sets, all of which won several awards and polls around the world, among them the 70CD + DVD The Complete Miles Davis Columbia Album Collection (2009) and this year’s Miles Davis Live In Europe 1969, The Bootleg Series Vol. 2.  Since 2011, Seidel has also produced for Legacy sixteen other Complete Album Collections including titles by Thelonious Monk, Charles Mingus, Weather Report, The Mahavishnu Orchestra, Return To Forever, The Brecker Brothers, Wayne Shorter, Stan Getz, Paul Desmond, Nina Simone, Sarah Vaughan, and Etta James, as well as the Grammy®-nominated To Be Free: The Nina Simone Story box set (2008).

“Taken in its entirety,” writes Belden, “The Complete Columbia Album Collection 1972-1988 gives the listener and reader a glimpse into the internal philosophy of life of Herbie Hancock contained in these CDs.  Rarely does a collection of sound contain so much of a human being’s revelatory process.  Within these CDs you can listen to a musician reinvent himself time and time again, all at his terms.”